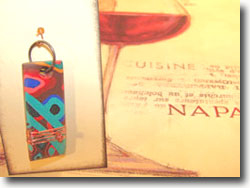 It May Take a Little Reworking to Transform Your Jewelry Creations From Being Just OK To Becoming Super Fun!

Sometimes it is the extra effort that makes all the difference. Although the polymer clay pendant in the photo to the left was nice enough when I first made it, there just seemed to be something missing.

It was originally created using a Mod Cane made up of a collection of Bullseye Canes… pleasing colors and all, but the design was a little boring. So I laid a few strips of the scraps at an angle to break up the polka dot look and that give the pendant more interest.

Once it was baked and sanded, I added a small silver jump ring. Still something missing though…

Have you ever done that? Looked at your project/decor/outfit and thought it would look a lot cooler if it was accessorized better?

I do that often with things I have made. After stepping away from the project, you can be more objective about what is missing or what can be done to improve it.

It is not as though this little pendant is a gallery piece that deserves a massive amount of time and effort in getting it right. It’s just that in order for it to be worn often and not just left in the jewelry box, it needed that extra bit of funkiness. Something that causes you to say, “I think I’ll wear that today.”

So to give this pendant a little ‘funk’ I swapped out the silver jump ring for an oversized Gunmetal jump ring and wrapped the base in ultra fine gauge copper wire that I salvaged from an old radio. A tiny glass seed bead was added on top of the wire wrapping as a way of tying off the wire and for a touch of sparkle.

So what polymer clay jewelry piece do you have that either isn’t selling or just doesn’t quite look finished, Tell me about it below and I’ll see if I can offer some ideas or suggestions that might be helpful.