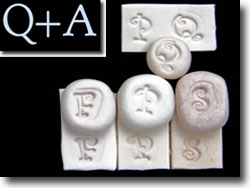 Battle of the Brands: An Experiment for Strength, Hardness and Flexibility:

Q: Hi Cindy, When you get a moment I’d like your opinion on this. I’m so new to polymer clay work that it isn’t funny. What make of clay is best for thicker items (1/4 – 1/2″) that are made and baked. My first purchase of clay to work with was Sculpey III. I find that after it is baked it isn’t as hard as I would expect it to be. Which make of clay bakes the hardest? Thanks so much for your time. ~Eric

A: Well Eric I thought it would be fun to answer your question by doing a little experiment! Although I had some good guesses as to which clay bakes the hardest, it’s always best if you can show proof.

So taking 3 of the most common brands of polymer clay Fimo, Premo and Sculpey III, I baked up samples in thin sheets and thick blocks to see how they would compare in a number of categories. I also baked up a sample with Fimo Mix Quick added in to see if that made any difference.

Each strip sample was approximately 1/16″ thick, and the blocks were 3/8″. Using a letter rubber stamp I identified each brand with a letter:

Here are the results after baking for 1 hour:

For strength and hardness I honestly cannot recommend Sculpey III. It was the most brittle, the least flexible and it baked to an icky purple-brown… definitely faired the worst. All stuff I knew through experience but it was fun to see the side by side comparison! Here’s another article you may want to read about my least favorite brand: Sculpey III Makes Me Mad

As far as the hardest polymer clay off the shelf, I’d have to give first place to Fimo clay. But the winner for strength goes to Premo Sculpey. Premo mixed with Fimo Mix Quick seemed to improve the strength as well. So that combination gets top honors. Thanks goes out to doll artist Bonnie Jones for the advice she has given me in the past, about using Quick Mix to add strength to polymer clay. Questions? Comments? You know what to do :)