Scented Polymer Clay – Is There a Secret Formula? 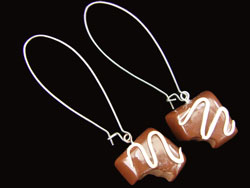 Getting your polymer clay miniature food (yummm… chocolate)to smell as good as it looks:

Scented polymer clay miniature food charms, beads and jewelry are all the rage now. But figuring out how to scent the polymer clay seems to be a well guarded secret. I have been getting inquiries about this for a while now. Here’s a recent one:

Hello Cindy!  I recently found your site and I love it!  I was wondering though, I have a website where I sell my polymer clay jewelry.  I make a lot of sweets, cakes, cookies, etc.. I’ve seen people who make their cakes and candies scented! I’ve looked all over for scents, or a tutorial on what to use, and how to use it. Can you help me? Thanks! Ryssa, DogEatDog Productions.

I have been testing out a few different ways of adding scent to polymer clay and my results are OK, but still not that great (yet). When I get some better results I will post them here at my blog. But for now…

These are my findings so far:

I know I’ll discover something that will work well to scent polymer clay. Our kids have a little plastic bear holding a cookie that smells like chocolate chips. It has kept its scent for many years. And lots of people are selling scented polymer clay charms and things. They’re just not giving up their secrets though. So my search continues…